Cyclist die in our cities trying to circumvent too much traffic and survive hostile streets. Yes, cyclist die and they die too often. At the end of August this was the case of Michael Schenkman, 78, an avid and popular New York cyclist that also taught driver’s education for several years. He knew how to sort the dangerous and busy streets of New York. But nevertheless, he died stroked by a black Chevrolet that dragged him 25 feet.

I have been cycling through the streets of Barcelona for the last 15+ years. Barcelona is as dangerous as New York for cyclists. In the last years separated lanes for cyclist have been built,  but none on the sidewalks, which obviously limits adoption. When you cycle often through cities  you are very aware of the risk, you know that no matter what you do, a car or a motorbike can hit you and you will die or end up seriously injured. For the sake of the example, in New York, Schenkman’s death was the fifteenth until August. A pretty bad record.

However, even if this happens and happens too often, even knowing how to address it. Most of the times, nothing gets done, beyond regretting the causality.

These days San Francisco is putting in place a new program that addresses this problem: SF Vision Zero. In San Francisco, where cycling is pretty popular, about 30 cyclist die every year and 200 result seriously injured. 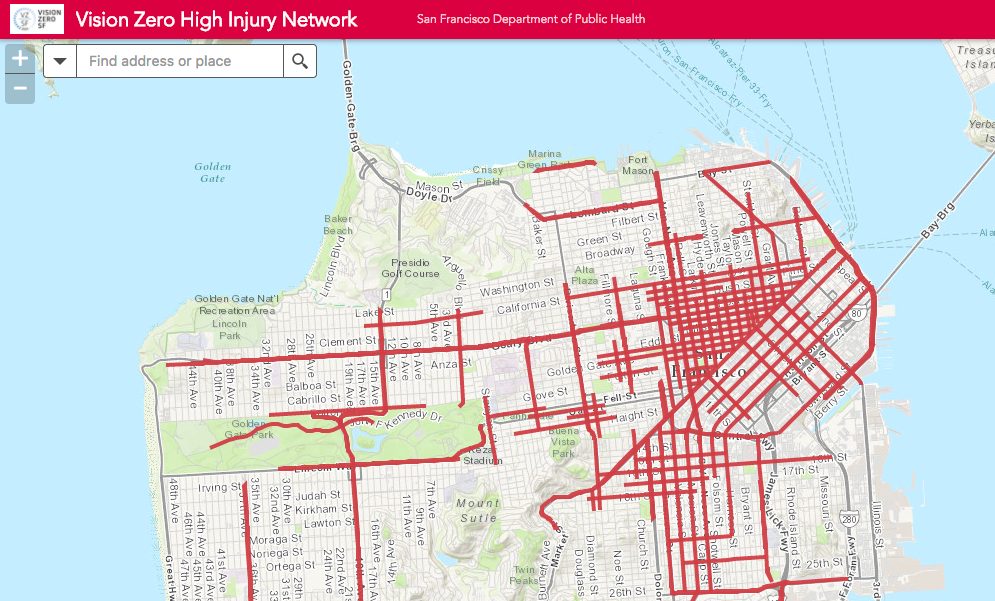 What is particularly interesting however, is not the program itself but how it was put together, because this was a Data Driven initiative.

San Francisco started creating TransBase , a platform to map and visualize traffic incidents. And for analyzing this information, they created another application: the High Injury Network  where the hottest points were highlighted.

As often happens, data analysis discovered that 70% of major injuries happened in a mere 12% of the intersections of the city. One more version of the 20/80 rule. Therefore, the problem was solvable and tractable without committing an excessive amount of resources.

This was the starting point for Mayor Lee’s Vision Zero program. A commitment to reduce to zero collision deaths of bikes and pedestrians by 2024.

We all know that an Executive Directive neither in San Francisco nor in Europe means much, even an ambitious one, if there is not a plan and a budget behind to implement it. However, this time it was: Protected Intersection (http://www.protectedintersection.com).

The plan borrows ideas from Dutch and other European cities to design cycle friendly junctions trying to increase the visibility of cyclists and creating safer areas for them.

However, beyond the plan what is important is the fact that policy implementation includes the use of the massive data available and its analysis to guide this implementation.

We often encounter that complex policies are driven by pre-conceived ideas on how things work and how they will work. This was probably the only possibility in a world where data was scarce, however we don’t live any longer in this world. Now data is abundant and policy too has to take advantage of this abundance. We need data driven policies.